Back to New Build Homes index 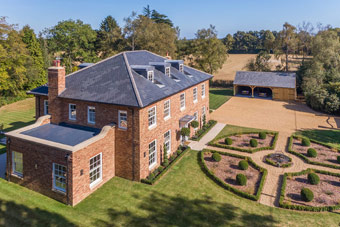 Sadly the phrase 'attention to detail' has become a cliche. It is trotted out so often it has lost its currency. But in the case of Anthony and Julie Hayes, the virtue of paying attention to everything is evident to an extraordinary degree in the five bedroom, four bathroom, four recption room 5,220 sq ft house they built for themselves in the village of Little Gaddesden in Dacorum.

Even the screws for the smallest jobs and the angle at which the bathroom tiles were cut with mitred edges were cause for deliberation, before being entrusted to a craftsman, regardless of the extra time expended.

Walk in to the kitchen-breakfast room and you are in a space 38ft by 29ft running front to back of the house. There’s not a kitchen appliance, not even a wooden spoon, to be seen. All the utensils and gadgets are within an arm’s reach but in a walnut-lined purpose built cupboard or drawer, out of sight so as not to spoil the sculptural beauty of the clutter-free worktops.

Julie, it is fair to say, is obsessed with detail. But she is also eminently practical and having enough storage space is a priority. Her input as the interior designer on the project goes far beyond selecting the colour for the walls and choosing soft furnishings.

Please click the thumbnails below to launch the gallery viewer:

It was the difficulty in finding quality tradesmen for the renovations they took on when the couple first caught the property bug that led them to set up their own design and build company Frithsden Construction.

“Now, 15 years later we have built 12 new builds – all bespoke designs – and worked on 15 refurbishment projects using our trusted carpenters, plumbers and electricians, overseen by our experienced and driven site managers,” Julie says.

“We’re not a big company. We prefer to commit to only one or two new builds a year and possibly one or two refurbishments. All our projects so far have been in the Berkhamsted area.”

Since setting up the firm, a couple of the properties they built from scratch or restored became a family home for themselves and their two sons, now aged 17 and 12. They were renting, having sold their previous house, when they found the acre of land for what became Oak House.

“The existing house for demolition was on one side of the garden. We were able to live in that and be on the spot everyday to oversee the building of the new one in the middle of the plot. It couldn’t have been better,” Julie explains.

Her in-depth knowledge of the construction process comes from playing a hands-on role in the all of the projects she and Anthony have been involved with for 20-odd years. Despite her clear talent she admits: “I don’t have letters after my name, that worries me sometimes.”

She says they’ve made the odd miscalculation in the past and learnt from the experience.

“There was one house we renovated and it won an award. We decided to have a large open-plan dining hall and dispense with a separate dining room. After we moved in, it wasn’t long before we regretted not having a dining room. Also the boys’ playroom was too small. You need a decent sized family room. We haven’t made that mistake again.”

When it came to designing the house in the quaintly-named Nettlebed Road in Little Gaddesden, there was no doubt about the style it would take.

“We wanted to build a house that would sit well in the plot and acknowledge the countryside surroundings.

“We felt a traditional Georgian style with classic dimensions and full height windows too allow the light to flood in would settle into the landscape and stand the test of time, especially if it was built with natural honest materials and build techniques.”

So the Flemish bond multi bricks for the outer walls were handmade by HG Matthews, brickmakers in nearby Bellingdon, Bucks, with traditional splayed headers over the windows. The slate roof and lead inset dormer windows with traditional roll mop detailing was all made by hand – the lead work was a labour of love, Julie recalls, “it took ages.”

The deep soffit overhang and feature cowbells all around the rooflines match the detail on the porch over the large panelled front door. And at the back of the house the anthracite grey bifold doors in the sitting room and kitchen remove the barrier between the inside and out – a contemporary feature for modern living.

“As for the kitchen-dining room, we wanted to create a family and entertaining area for everyone to come together, cook, eat and chat,” Julie explains. The four metre long island with double ogee (double curve) profile Corian worktop echoes the detail in the decorative ‘coffer’ ceiling with discreet LED lighting set into the coving.

“I particularly wanted a seating area with a TV at one end of the room so the children could be in the same room as me when I’m cooking their tea.”

Please click the thumbnails below to launch the gallery viewer:

Julie adds it’s important that choices made when designing a home are not made in isolation, and the buy quality where it matters and save where you can: “Spend your money on quality fittings for bathrooms then shop around for good prices on tiles,” she advises.

She points out that the lighting is an area which is often overlooked in a build. “It’s seen more as a necessity than an opportunity to create different settings and feelings in a room. For example in the kitchen and lounge we used the Rako system that allows us to turn on up to seven different settings and dimming levels.”

Pendant lights over the island and five amp lamps give a softer glow when the task lighting is not needed. “These days you can turn on all the lamps in the room with one switch. I’d rather have lots of lights than a central light.”

The designer makes a point of working out where the eye will settle when you enter a room. So there was no question of choosing any old staircase for the hall at Oak House. She and Anthony had a Georgian flight of stairs designed by Bourne End-based specialists Flair Stairs.

“It combines walnut handrails and treads with white painted Georgian spindles and risers. It was important that the second flight up (up to the two bedrooms and bathroom in the top floor) didn’t feel reduced or less important than the main staircase, so we tried to keep the proportions the same.”